When the Sick Rule the World 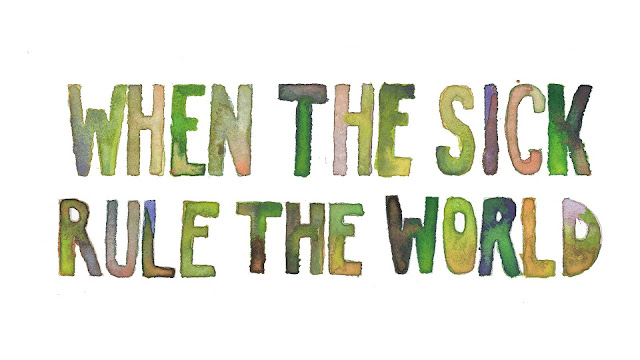 When the Sick Rule the World

As part of the exhibition, a performance by Lauryn Youden will be held on Saturday, March 16th, from 5pm

“When two sick bodies come together their desperate hearts open, it is lovely to watch them...” (1)

The exhibition When the Sick Rule the World is inspired by an essay by the same title written by Dodie Bellamy. Within her writing, Bellamy often calls attention to the unjustifiable and increasingly unsustainable living conditions that late-capitalism has imposed on present-day reality. It is the unrelenting objective of the hegemonic powers in place to ever-expand and maintain dominion over those who can be controlled, and to rid society of that which is considered undesirable, unattractive, and unhealthy. Whatever or whoever falls into this category is systematically hidden away or eradicated either by authoritative forces or incessant self-regulation.
For the human subject, the pursuit of wellness is mandatory. In Bellamy’s When the Sick Rule the World, the topic of physical and mental health comes to the fore. Bellamy imagines a reality in which those existing in the underbelly of society are finally accorded agency, integrity and freedom of expression–no longer condemned because of their inability to conceal their differences and conform to norms that have been beset upon them. In a similar vein to Bellamy’s text, the exhibition When the Sick Rule the World presents artworks that have spawned from visions of alternative realities or narratives in which sickness and health, birth and decay are leveled, accepted, perhaps even exalted. The enigmatic figures depicted in the works of Nschotschi Haslinger can often be seen embracing their eerie surroundings, content and relaxed in actively caring for one another or themselves, despite the jagged scenery. Her ceramic creatures appear inflamed with animation, having only just emerged from their underworld. Similarly spawning, the work of Marek Delong and Anna Slama depicts a kind of fantastical birthing scene of an alien or crustaceous being. The collaborative work between Viktor Timofeev and Painting Clubb deals more closely with the relationship one has with the material or collective body. Painting Clubb consists of many authors – the resulting work depicts characters and gestures emerging from a thinly veiled layered textile surrounding a cryptic message in an alphabet created by Timofeev reading “My relationship with my body has changed”. In Beth Collar’s work, attention is directed to the fragility and instability of the human body in its surroundings– her figure is both supported and impaled by their crutches. In a similar effect, Lauryn Youden’s sculptural cane doubles as potential weapon of self defense, engraved with the phrase “I build my house on the heads of my enemies”, as part of a ritual for courage written by Luisa Teish. Her mixed-media altar is an altar for the ill, comprised of healing or medicinal materials and ingredients. Finally, Ville Kallio’s video work Plumber’s Crusty Paradise introduces us an anthropomorphization of human waste in the form of a living “fatberg” also known as the Patron Serpent of Planetary Computation and Feces, who energetically parallels the human mind to that of a sewer system.