Augmented Sunrise Beneath The Skin 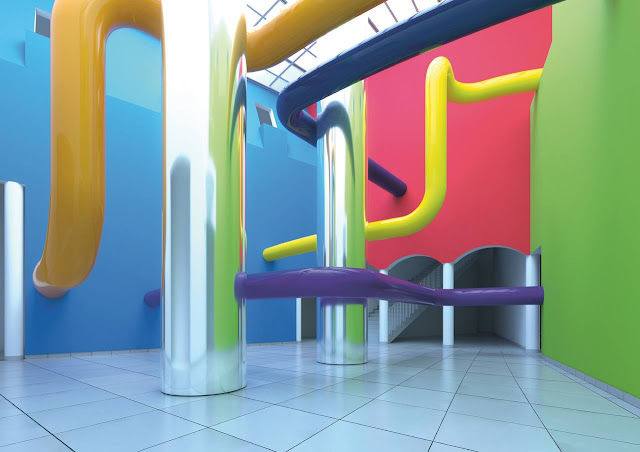 Augmented Sunrise Beneath The Skin

Augmented Sunrise Beneath The Skin features 10 artists producing work in Miami, Florida, and Berlin, Germany. The exhibition seeks to expose and subvert the infrastructural spaces and codes that dictate how our bodies relate to, live and work in the cities we call home.
Miami and Berlin share more than first meets the eye. Both are cities of exile and migration. Both are magnets for escapism and hedonism, battling with the scourge of gentrification. And both face the increasing creep of invasive infrastructure: expanding matrices of local and global capital; substratum
of socio-economic inequalities; globalized and standardized design protocols that define how everything is built, and how order is dictated to every denizen. Together, these artists offer a way of perceiving and subverting this infrastructural space.
Year of the rooster by French artist Claude Eigan [BER] is a visualisation of data collected during the recent presidential elections in France. Suspended from the ceiling, the piece peers down at us in the shape of both mask and landscape. Eigan’s sculptural forms reveal the terrain-disfiguring effects of
increasingly divided politics in our cities. Jamaican artist Jamilah Sabur’s [MIA] installation Mnemonic for the Caribbean Sea, com bines geological theories and family history, treating both as sites of generational memory.
Elite Kedan [MIA], Domingo Castillo [MIA], and Ittah Yoda [BER] examine the operating systems that are shaping our post-human existences, speculating within the histories and future possibilities of climate change, world building and ecology. Kedan’s Watershed.Rug, is an area rug em bedded with screenshot imagery from a program used to digitally model the Miami Everglades watershed system. Watershed.Rug has a material and pragmatic delivery, intended to be a soft ground cover for the cobblestone floor of the gallery and to act as a seating area, a place of use, of interaction.
German artist Manuel Roßner [BER] and Colom bian artist Leo Castaneda [MIA] construct computer-generated worlds and games that probe the inherent biases and inequalities emerging in the futures being created for us. Castaneda’s virtual environment, Item Showroom Flythrough, features sneak previews of his videogame Levels and Bosses, articulated in both paintings and a digital environment. Roßner’s UltraLight Beam offers a virtual walkthrough of post-industrial buildings infiltrated by hyperreal pipe systems, breaking down the thin border between the real and alternative world constructed in 3D infrastructure software. UltraLight Beam’s candy-colored playground aesthetics echo the forms found in Polish-Canadian artist Przemek Pyszczek [BER], whose work explores displacement, personal history, memory and fabricated history.
German painters Jonas Schoeneberg [BER] and Daniel Wießbach [BER] both reference grids, structural codes and blueprints. Decontextualized but still rooted in their original history, Wiessbach’s paintings allude to underground station infrastructure: tiles layered and covered by graffiti, dirt and stickers, they are remnants from a divided Berlin. Schoeneberg’s painting, Rip Me Apart And Make Me An Asset, Veins Nest in Peace, is a structural piece made from architectural building materials, fragments of drywall displaced in critique of urban planning, a clash of form vs. function. visitor to step from Miami to Berlin, from real to unreal, from nano-sized nooks to satellite vistas as easily as skipping between tabs. Looking from one city to another, one state of being to another, the boundaries between and around each city, each state of mind, are dissolved; virtual and physical navigation
repurposed as a method to de- and recode our cities.

Participation by Miami-based artists is supported by ArtCenter South Florida.